SDR++ is a cross-platform and open source SDR software with the aim of being bloat free and simple to use. 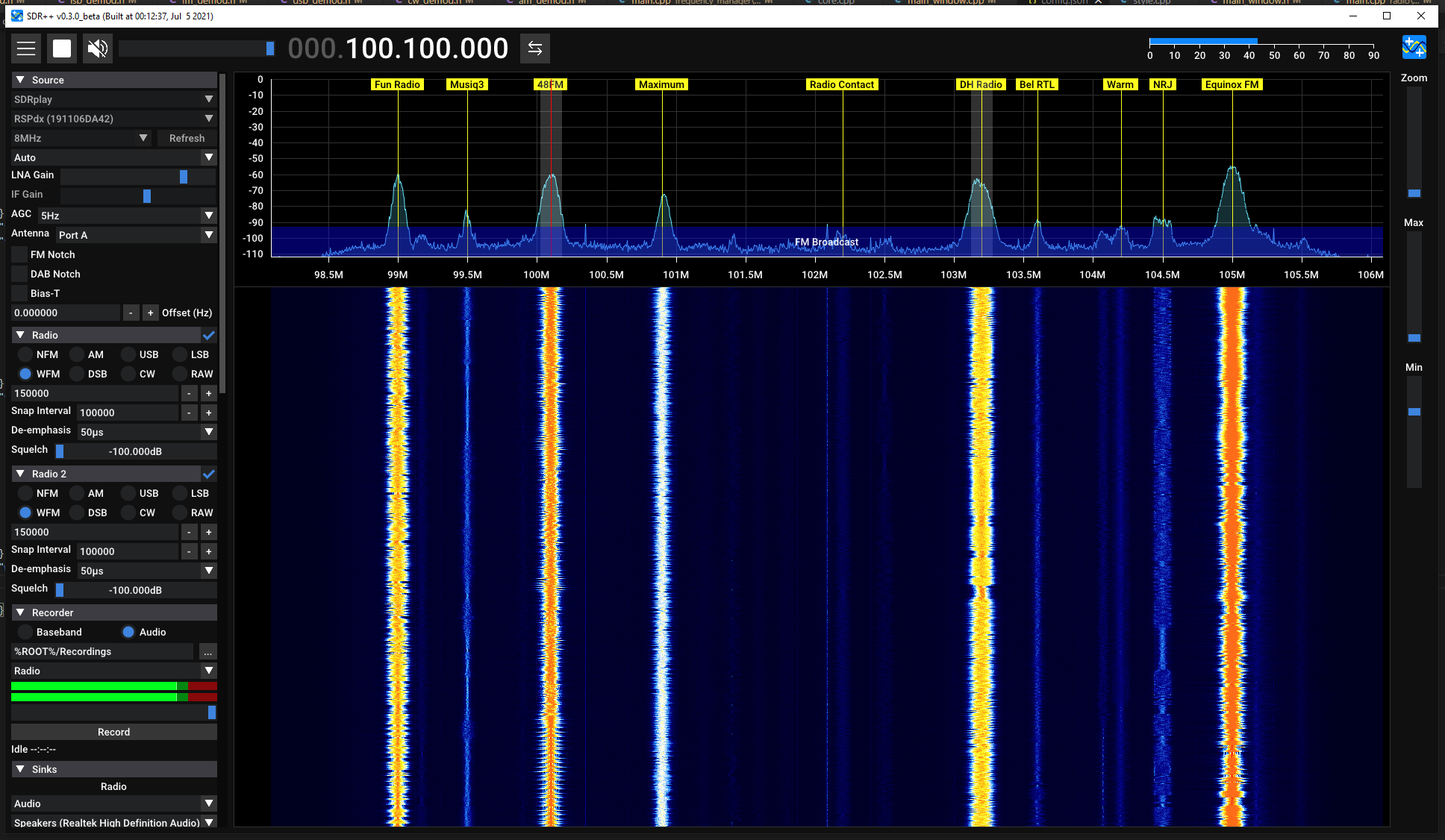 SDR++ is a cross-platform and open source SDR software with the aim of being bloat free and simple to use.

Download the latest release from the Releases page and extract to the directory of your choice.

To create a desktop shortcut, rightclick the exe and select Send to -> Desktop (create shortcut), then, rename the shortcut on the desktop to whatever you want.

Download the latest release from the Releases page and extract to the directory of your choice.

Install the latest release from the sdrpp-git AUR package

There are currently no existing packages for other distributions, for these systems you'll have to build from source.

You might get lucky by using the installer downloadable from the Releases page.

This guide requires you to have Homebrew installed. Check out https://brew.sh/ on how to do so.

Get yourself a copy of the source code. This can be done by downloading the source package from the Releases page. Extract it to a location of your choice. Alternativley you can clone https://github.com/AlexandreRouma/SDRPlusPlus.git using git.

Check jobs.build_macos in the build_all.yaml workflow for the exact options used for building the package available in the releases

There are currently no BSD packages, refer to Building on Linux / BSD for instructions on building from source.

The preferred IDE is VS Code in order to have similar development experience across platforms and to build with CMake using the command line.

After this, install the following dependencies using vcpkg:

You are probably going to build in 64 bit so make sure vcpkg installs the correct versions using .\vcpkg.exe install

This will create the root_dev directory that will be used to save the configs of sdrpp and the modules.

You will next need to edit the root_dev/config.json file to point to the modules that were built. If the file is missing in your folder run the application once and it will create one with default value -- see later on how to run the application.

Run SDR++ from the command line

From the top directory, you can simply run:

Or, if you wish to run from the build directory e.g. build/Release and adapt the relative path to the root_dev folder:

The optional -s argument is for keeping the console active in order to see the error messages.

Because all the paths are relative, for the rest of the command line instructions we are going to assume you are running from the top directory using the former command. As mentioned previously you need to edit root_dev/config.json to add the modules that were built. From the default configuration file you need to add the paths in the modules section. Add to this list all the modules you wish to use.

You also need to change the location of the resource and module directories, for development, I recommend:

Remember that these paths will be relative to the run directory.

If you choose to run SDR++ for development, you do not need this step. First, copy over the exe and DLLs from build/Release/ to root_dev.

The modules built will be some of the following (Repeat the instructions above for all you wish to use):

Select which modules you wish to build

Depending on which module you want to build, you will need to install some additional dependencies. Here are listed every module that requires addition dependencies. If a module enabled by default and you do not wish to install a perticular dependency (or can't, eg. the BladeRF module on Debian Buster), you can disable it using the module parameter listed in the table below

Note: make sure you're using GCC 8 or later as older versions do not have std::filesystem built-in.

If you wish to install SDR++, skip to the next step

Then, you will need to edit the root_dev/config.json file to point to the modules that were built. Here is an example of what it should look like:

You also need to change the location of the resource and module directories, for development, I recommend:

Remember that these paths will be relative to the run directory.

Of course, remember to add entries for all modules that were built and that you wish to use.

Next, from the top directory, you can simply run:

Or, if you wish to run from the build directory, you will need to correct the directories in the config.json file, and then run:

To install SDR++, run the following command in your build folder:

Not all modules are built by default. I decided to disable the build of those with large libraries, libraries that can't be installed through the package manager (or pothos) and those that are still in beta. Modules in beta are still included in releases for the most part but not enabled in SDR++ (need to be instantiated).

First, please make sure you're running the latest automated build. If your issue is linked to a bug it is likely that is has already been fixed in later releases

SDR++ crashes then it won't start again no matter what

In some cases, if a crash happened while the config was being saved, the config file woul be corrupted and SDR++ would refuse to start because of it.

This has now been fixed. If a config file is corrupted it'll just reset it to its default state.

You likely installed the soapysdr-module-all package on Ubuntu/Debian. If not it's still a SoapySDR bug caused by multiple soapy modules coming in conflict. Uninstall anything related to SoapySDR then install soapysdr itself and only the soapy modules you actually need.

If the module was included in a later update, it's not enabled in the config. The easiest way to fix this is just to delete the config.json file and let SDR++ recreate it (you will lose your setting relating to the main UI like VFO colors, zoom level and theme). The best option however is to edit the config file to add an instance of the module you wish to have enabled (see the Module List).

SDR++ crashes when stopping a RTL-SDR

This is a bug recently introduced by libusb1.4 To solve, this, simply downgrade to libusb1.3

SDR++ crashes when starting a HackRF

If you also have the SoapySDR module loaded (not necessarily enabled), this is a bug in libhackrf. It's caused by libhackrf not checking if it's already initialized. The solution until a fixed libhackrf version is released is to completely remove the soapy_source module from SDR++. To do this, delete modules/soapy_source.dll on windows or /usr/lib/sdrpp/plugins/soapy_source.so on linux.

If you still have an issue, please open an issue about it or ask on the discord. I'll try to respond as quickly as I can. Please avoid trying to contact me on every platform imaginable thinking I'll respond faster though...

Feel free to submit pull requests and report bugs via the GitHub issue tracker. I will soon publish a contributing.md listing the code style to use. 224 Superior Serial.print statements Use this to speed up your final project and reduce code bloat! And we learn about printing formatted strings usin

Khepri is a Cross-platform agent, the architecture and usage like Coblat Strike but free and open-source. SomeSmile - a free, open source and not yet cross-platform SomeSmile - a free, open source and not yet cross-platform Table Of Contents For What? Structure Start Usage Guide How To Build Screenshots End For Wh

This is kdmapper but it doesn't use ExAllocatePool instead it allocates pages to avoid being in BigPoolTable,

MicroPather is a path finder and A* solver (astar or a-star) written in platform independent C++ that can be easily integrated into existing code. MicroPather focuses on being a path finding engine for video games but is a generic A* solver.

Hack4Pan First Place. A robot that aims to improve your aim Sourcetrail Important Note: This project was archived by the original autors and maintainers of Sourcetrail by the end of 2021. If you want to know mo

This is a helper library to abstract away interfacing with floppy disk drives in a cross-platform and open source library.

Adafruit Floppy This is a helper library to abstract away interfacing with floppy disk drives in a cross-platform and open source library. Adafruit Fl MasterPlan is a project management software / visual idea board software. It attempts to be easy to use, lightweight, and fun.

MasterPlan is a customizeable graphical project management software for independent users or small teams. If you need to share plans across a whole co 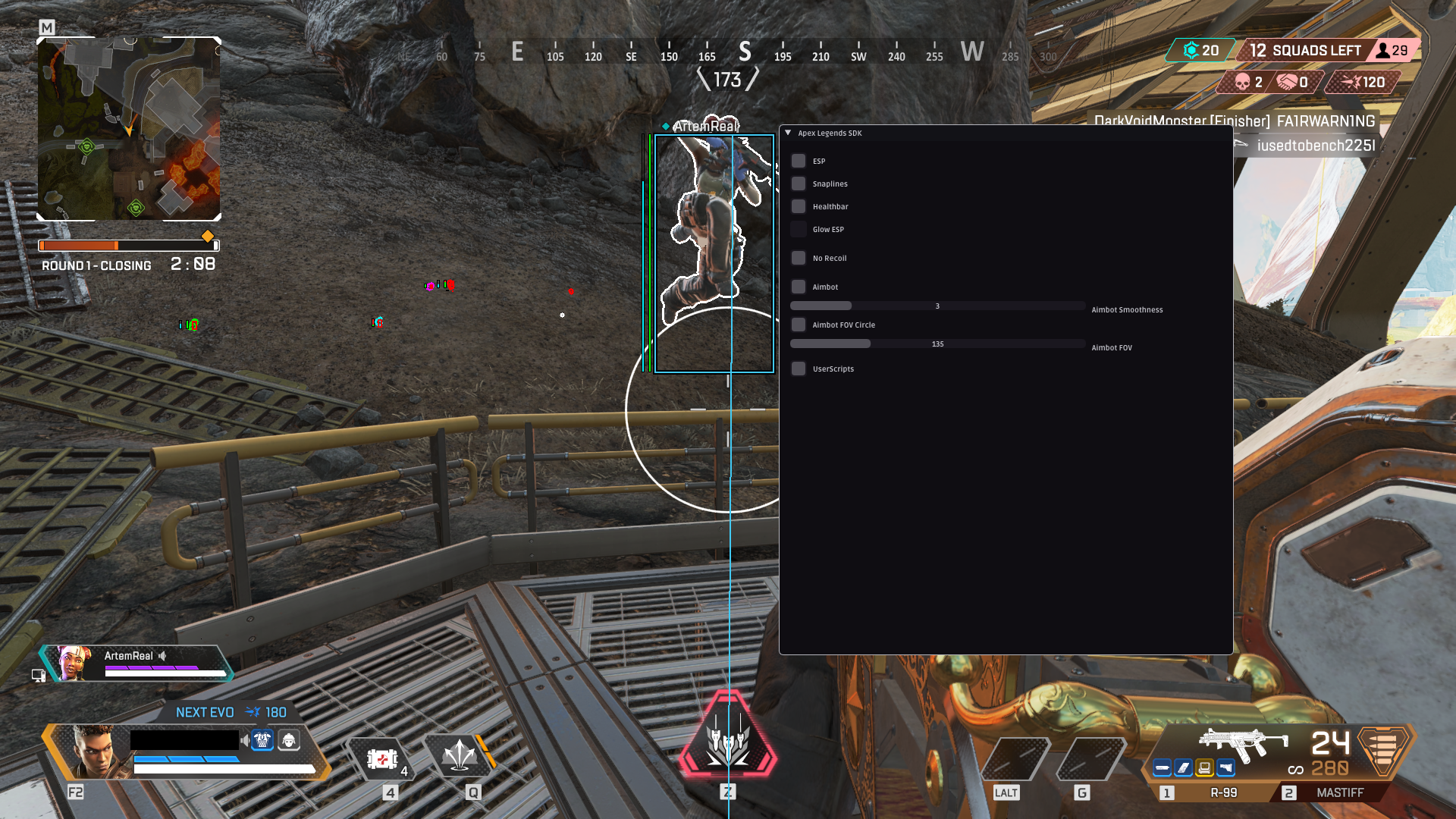