A special version of Packet Batch that utilizes the DPDK (this should be faster than the standard version).

This is a special version of Packet Batch that utilizes the DPDK, a kernel-bypass library. This does not use any form of Linux sockets.

With that said, the threads config option becomes obsolete in this special version because we use the DPDK's l-cores instead. A certain amount of ports are initialized per l-core depending on the EAL options and port mask.

The first part of the command line arguments should be the DPDK's EAL arguments which may be found here and ends with a --.

After specifying the EAL command line options and ending it with --, you may then add the original command line arguments from the Packet Batch Common project.

With the above said, there are also additional command line usage for this specific application which may be found below.

Examples may be found below.

Before building this project, you must install the DPDK and have compatible hardware. You can read the documentation here for more information.

The following commands should allow for an easy DPDK setup assuming you want to use the default configuration. You will need meson and ninja.

I've used the following commands to install meson and ninja.

Building and installing this project is fairly easy and just like the standard version after installing the DPDK. It includes building the Packet Batch Common repository which requires libyaml along with my custom-made the DPDK Common project. As long as you use the --recursive flag with git, it should retrieve all of the required submodules automatically located in the modules/ directory. Otherwise, you will need to go into the Common repository and execute the git submodule update --init command. We use make to build and install the application.

After installing, the executable is copied to the /usr/bin/ directory which should be included in your $PATH. Therefore, you may use the application globally (in any directory).

A DoS/pen-test tool that uses AF_PACKETv3, AF_XDP or the DPDK depending on the version you choose. A packet acknowledgement system for UDP

Introduction reliable is a simple packet acknowledgement system for UDP-based protocols. It has the following features: Acknowledgement when packets a

Lightway Core NOTE: This is a preview snapshot of the Lightway repository used for both our client and server. We will be publishing a live, actively

termux-am-socket This is a small program for sending commands to the Termux:API app, thereby allowing terminal programs to use the Android API. The pr

Common utilities useful for embedded systems that are often not included in an RTOS or the standard C library. Welcome to Fitterbap, the Firmware toolkit to enable reliable best architecture practices! Fitterbap provides common utilities useful for embedded systems that are often not included in an RTOS or the standard C library.

hell_o Linux only. Tiny HTTP Server on C, using only standard libraries. It is unfinished yet, going to add working interface and rewrite handler late

IRC server based on TCP/IP protocol to rfc1459 standard

Common files for Packet Batch. Read this for configuration guidance and more!

PcapPlusPlus is a multiplatform C++ library for capturing, parsing and crafting of network packets. It is designed to be efficient, powerful and easy to use. It provides C++ wrappers for the most popular packet processing engines such as libpcap, WinPcap, DPDK and PF_RING.

PcapPlusPlus is a multiplatform C++ library for capturing, parsing and crafting of network packets. It is designed to be efficient, powerful and easy

flow-orchestrator About This is currently just a platform for me to learn more about DPDK and to have a foundation for some experiments. Building Buil

Examples and test programs I made while learning the DPDK.

The DPDK Examples (WIP) Description A small repository I will be using to store my progress and test programs from the DPDK, a kernel bypass library v

LIBPCAP 1.x.y by The Tcpdump Group To report a security issue please send an e-mail to [email protected] To report bugs and other problems, contri 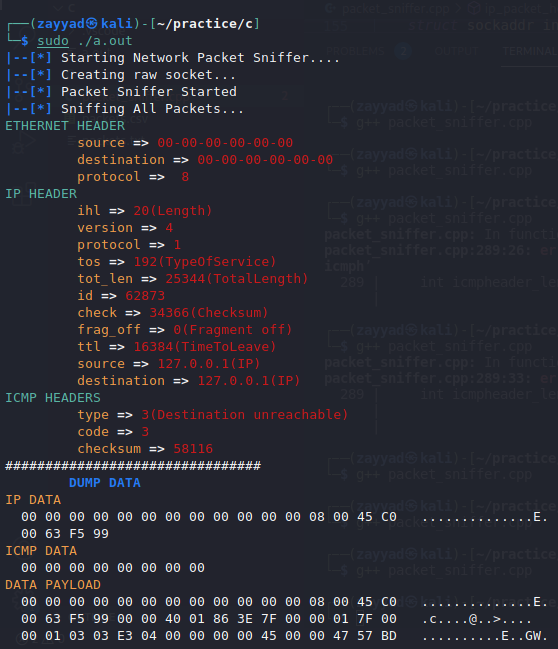 packt packt is a simple CL(command line) network packet sniffer which can run on any unix-like OS including termux (Android). packt works by first ope