CHIP-8 was a virtual machine/programming language developed by Joseph Weisbecker for the COSMAC VIP in the 1970s. It was designed with 35 opcodes and resembles assembly language, but was made for the easier development of video games on the VIP.

Today, it is a popular target to be emulated because of its simplicity and charm.

The original CHIP-8 virtual machine was designed with the following specs:

Due to the way CHIP-8 was designed, the "flicker" that happens when sprites are drawn is normal. Games developed for it also rarely made any attempt to cap their frame rate due to the slow hardware of the time hence the need to artificially slow the CPU down on modern emulators.

In the early 90s, Andreas Gustafsson created a port for the HP48 calculator which was eventually superseded by S-CHIP 1.0/1.1 created by Erik Bryntse. The S-CHIP added several features as well as accidentally (or intentionally?) modifying the behavior of several original opcodes:

With time it seems the S-CHIP became more popular and many programs were written to work with its various quirks. Thus, JAXE defaults to original S-CHIP design however many of its quirks can be toggled for improved compatibility using the flags in the Options section below.

However, recently John Earnest designed the XO-CHIP extension allowing CHIP-8 programs to take advantage of modern hardware to an extent. This extension adds several more instructions and features including:

JAXE currently supports all of these extensions.

Unit Tests (Debug Must Be Set)

Also includes flags for disabling specific S-CHIP "quirks" (which are all enabled by default):

Keyboard (This maps to the key layouts below)

Anyone is welcome to contribute! I will try to review pull requests as quickly as possible.

JAXE is licensed under the MIT license so you are free to do almost whatever you please with this code (see LICENSE file).

A tiny but (will be) featured rasterizer

Introduction This is my own rasterizer implementation. Developed in C++17. Usage compile ./rasterizer [model], model names plz refer to this README Ro

OpenToonz 日本語 What is OpenToonz? OpenToonz is a 2D animation software published by DWANGO. It is based on Toonz Studio Ghibli Version, originally deve SFML_GamepadSupport Gamepad support for SFML based on XInput and the game controller DB for SDL Installation Download the latest gamecontrollerdb.txt 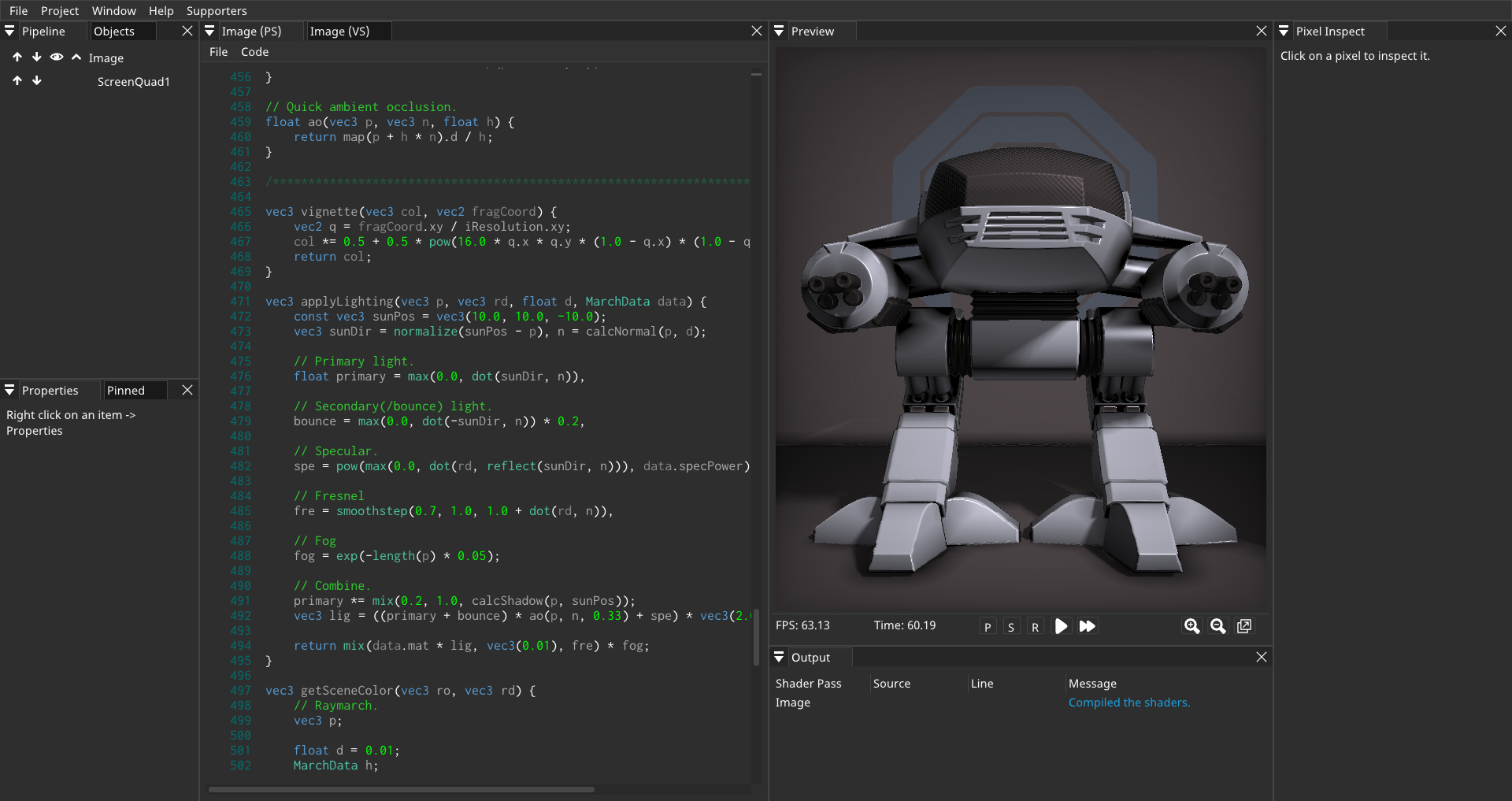 SHADERed is a lightweight tool for writing and debugging shaders. It is easy to use, open source, cross-platform (runs on Windows, Linux & Web).

CHIP-WALO Intro CHIP-8 is an interpreted programming language which was initially used in the late 1970s. It was made to allow more easily programed g

Freeze OS is a cross-platform operating system emulator that runs on top of an interpreter called the Freeze interpreter.

EMUCHIP8 Chip-8 Demo Video This is a fun retro emulator project of mine. You can download the source code and build with MAKE, then insert your chip-8

A simple CHIP-8 emulator made for the purpose of studying computer organization, mainly how emulation does work.

CHIP8EMU A simple CHIP-8 emulator made for the purpose of studying computer organization, mainly how emulation does work. It was written in just a few

Description (Some frames were deleted to make the GIF smaller) CHIP-8 interpreter/debugger made with C++ 17. SDL 2.0.16 for window creation, event han

Basic emulator for the CHIP-8 system

CHIP-8 Emulator Overview This project aims to write a small and functional CHIP-8 emulator (or more accurately an interpreter, since CHIP-8 wasn't eve

Cobalt Strike is a commercial, full-featured, remote access tool that bills itself as "adversary simulation software designed to execute targeted attacks and emulate the post-exploitation actions of advanced threat actors". The goal of this repository is to introduce a new, customizable, scalable, and fully opensource mobile robot platform, called SMARTmBOT. This repository provides a guide, and all design files and source codes so that you can build your own SMARTmBOT. SMARTmBOT can be useful for studying the basics of robotics, especially mobile robotics. It can also be used to study advanced topics such as swarm robotics.