Pattern-defeating quicksort (pdqsort) is a novel sorting algorithm that combines the fast average case of randomized quicksort with the fast worst case of heapsort, while achieving linear time on inputs with certain patterns. pdqsort is an extension and improvement of David Mussers introsort. All code is available for free under the zlib license.

pdqsort is a drop-in replacement for std::sort. Just replace a call to std::sort with pdqsort to start using pattern-defeating quicksort. If your comparison function is branchless, you can call pdqsort_branchless for a potential big speedup. If you are using C++11, the type you're sorting is arithmetic and your comparison function is not given or is std::less/std::greater, pdqsort automatically delegates to pdqsort_branchless.

A comparison of pdqsort and GCC's std::sort and std::stable_sort with various input distributions: 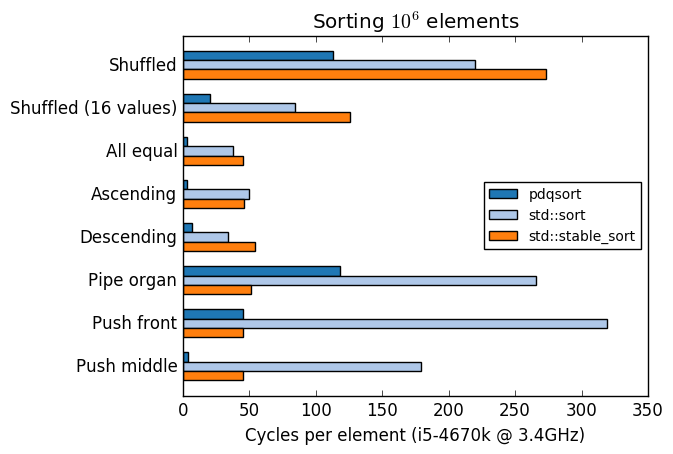 A visualization of pattern-defeating quicksort sorting a ~200 element array with some duplicates. Generated using Timo Bingmann's The Sound of Sorting program, a tool that has been invaluable during the development of pdqsort. For the purposes of this visualization the cutoff point for insertion sort was lowered to 8 elements.

pdqsort is designed to run in linear time for a couple of best-case patterns. Linear time is achieved for inputs that are in strictly ascending or descending order, only contain equal elements, or are strictly in ascending order followed by one out-of-place element. There are two separate mechanisms at play to achieve this.

On average case data where no patterns are detected pdqsort is effectively a quicksort that uses median-of-3 pivot selection, switching to insertion sort if the number of elements to be (recursively) sorted is small. The overhead associated with detecting the patterns for the best case is so small it lies within the error of measurement.

pdqsort gets a great speedup over the traditional way of implementing quicksort when sorting large arrays (1000+ elements). This is due to a new technique described in "BlockQuicksort: How Branch Mispredictions don't affect Quicksort" by Stefan Edelkamp and Armin Weiss. In short, we bypass the branch predictor by using small buffers (entirely in L1 cache) of the indices of elements that need to be swapped. We fill these buffers in a branch-free way that's quite elegant (in pseudocode):

This is only a speedup if the comparison function itself is branchless, however. By default pdqsort will detect this if you're using C++11 or higher, the type you're sorting is arithmetic (e.g. int), and you're using either std::less or std::greater. You can explicitly request branchless partitioning by calling pdqsort_branchless instead of pdqsort.

Quicksort naturally performs bad on inputs that form patterns, due to it being a partition-based sort. Choosing a bad pivot will result in many comparisons that give little to no progress in the sorting process. If the pattern does not get broken up, this can happen many times in a row. Worse, real world data is filled with these patterns.

Traditionally the solution to this is to randomize the pivot selection of quicksort. While this technically still allows for a quadratic worst case, the chances of it happening are astronomically small. Later, in introsort, pivot selection is kept deterministic, instead switching to the guaranteed O(n log n) heapsort if the recursion depth becomes too big. In pdqsort we adopt a hybrid approach, (deterministically) shuffling some elements to break up patterns when we encounter a "bad" partition. If we encounter too many "bad" partitions we switch to heapsort.

A bad partition occurs when the position of the pivot after partitioning is under 12.5% (1/8th) percentile or over 87,5% percentile - the partition is highly unbalanced. When this happens we will shuffle four elements at fixed locations for both partitions. This effectively breaks up many patterns. If we encounter more than log(n) bad partitions we will switch to heapsort.

The 1/8th percentile is not chosen arbitrarily. An upper bound of quicksorts worst case runtime can be approximated within a constant factor by the following recurrence:

Where n is the number of elements, and p is the percentile of the pivot after partitioning. T(n, 1/2) is the best case for quicksort. On modern systems heapsort is profiled to be approximately 1.8 to 2 times as slow as quicksort. Choosing p such that T(n, 1/2) / T(n, p) ~= 1.9 as n gets big will ensure that we will only switch to heapsort if it would speed up the sorting. p = 1/8 is a reasonably close value and is cheap to compute on every platform using a bitshift. 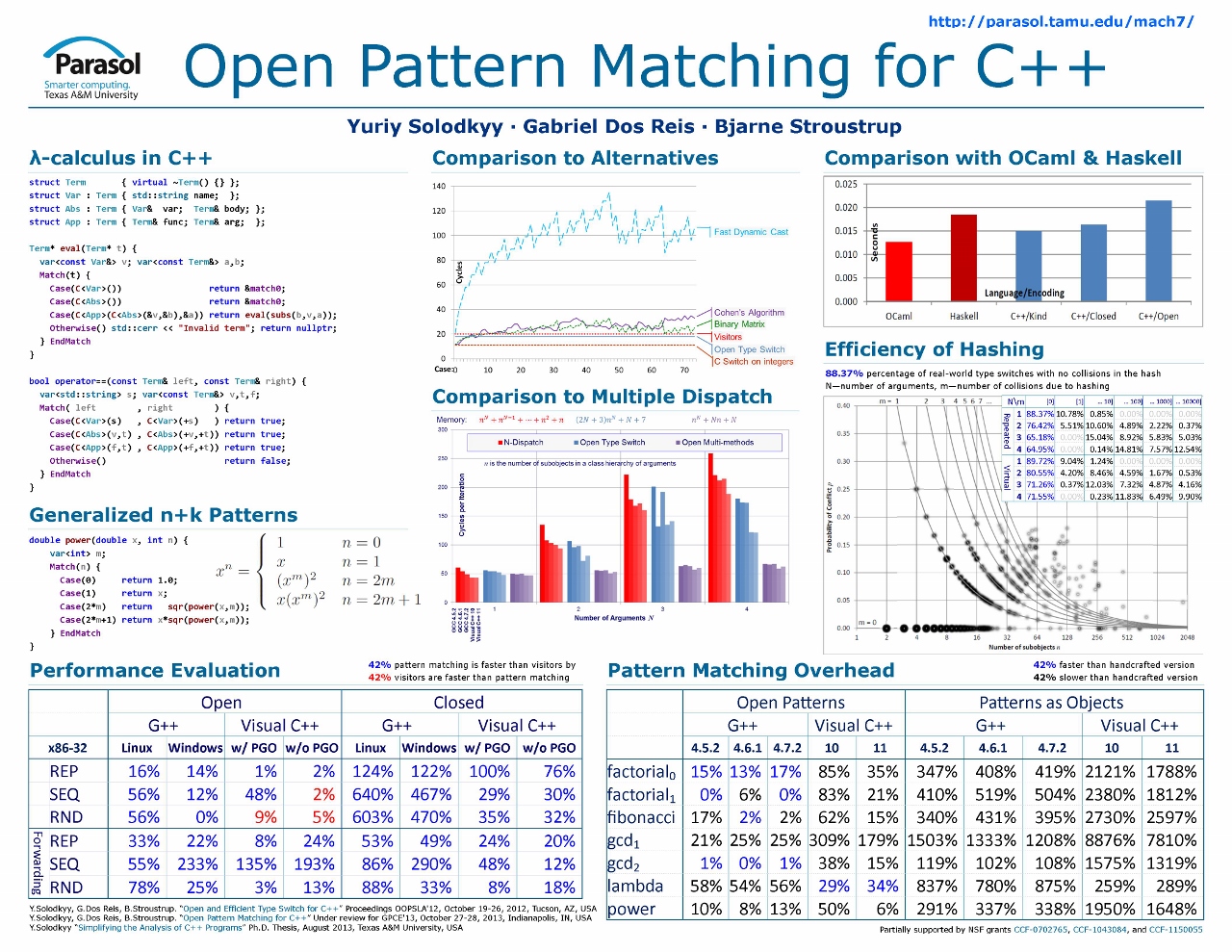 TQ-pre-jailbreak A PRE-jailbreak for iOS 14.0 ~ iOS 14.3 on all devices. Generally speaking, jailbreak starts from an arbitrary kernel r/w vulnerabili

Simple, Extensible C++ Pattern Matching Library I have recently been looking at Haskell and Rust. One of the things I wanted in C++ from those languag

Colibri core is an NLP tool as well as a C++ and Python library for working with basic linguistic constructions such as n-grams and skipgrams (i.e patterns with one or more gaps, either of fixed or dynamic size) in a quick and memory-efficient way. At the core is the tool ``colibri-patternmodeller`` whi ch allows you to build, view, manipulate and query pattern models.

Ideas, thoughts, and notes on a typeclass/interface based polymorphism pattern for standard C

Polymorphism through Typeclasses / Interface / Traits Ideas, thoughts, and notes on an action based polymorphism pattern for good ol' C. Originally us

Colibri core is an NLP tool as well as a C++ and Python library for working with basic linguistic constructions such as n-grams and skipgrams (i.e patterns with one or more gaps, either of fixed or dynamic size) in a quick and memory-efficient way. At the core is the tool ``colibri-patternmodeller`` whi ch allows you to build, view, manipulate and query pattern models.

A kata to practice refactoring to the State Pattern

A kata to practice refactoring to the State Pattern

A kata to practice refactoring to the strategy pattern. A simple network library powered by epoll and proactor pattern.

spinet A simple network library powered by epoll and proactor pattern. Installation Required cmake version 3.10 or above c++ standard 17 or above git

Edf is an event-driven framework for embedded system (e.g. FreeRTOS) with state machine and subscriber-publisher pattern.

Edf means event-driven framework. Event-driven programming is a common pattern in embedded systems. However, if you develop software directly on top o

This repository contains the Assignment code of Data Structures and Algorithms Assignments of SPPU, Second Year IT Syllabus (2019 pattern)