SeaStar is an event-driven framework allowing you to write non-blocking, asynchronous code in a relatively straightforward manner (once understood). It is based on futures.

Assuming that you would like to use system packages (RPMs or DEBs) for Seastar's dependencies, first install them:

then configure (in "release" mode):

If you're missing a dependency of Seastar, then it is possible to have the configuration process fetch a version of the dependency locally for development.

For example, to fetch fmt locally, configure Seastar like this:

--cook can be repeated many times for selecting multiple dependencies.

The configure.py script is a wrapper around cmake. The --mode argument maps to CMAKE_BUILD_TYPE, and supports the following modes

Using Seastar from its build directory (without installation)

It's possible to consume Seastar directly from its build directory with CMake or pkg-config.

We'll assume that the Seastar repository is located in a directory at $seastar_dir.

and with CMake using the Seastar package:

You can also consume Seastar after it has been installed to the file-system.

then run the install target:

then consume it from pkg-config:

or consume it with the same CMakeLists.txt as before but with a simpler CMake invocation:

(If Seastar has not been installed to a "standard" location like /usr or /usr/local, then you can invoke CMake with -DCMAKE_PREFIX_PATH=$my_install_root.)

There are also instructions for building on any host that supports Docker.

Use of the DPDK is optional.

Seastar supports both C++17, and C++20. The build defaults to the latest dialect supported by your compiler, but can be explicitly selected with the --c++-dialect configure option, e.g., --c++-dialect=gnu++17, or if using CMake directly, by setting on the Seastar_CXX_DIALECT CMake variable.

There is a mini tutorial and a more comprehensive one.

The documentation is available on the web.

Information can be found on the main project website.

Seastar comes with its own userspace TCP/IP stack for better performance.

Network-Learn A cross-platform network learning demos (toys). And I try not to use 3rd-party libraries. Welcome to try it out and leave your comments.

KBMS is a C++11 high performance network framework based on libevent.

KBMS is a C++11 high performance network framework based on libevent. It is light and easy to deploy. At present, it mainly supports HTTP protocol.

wau This should work with Lua 5.3+. By default it builds with 5.3 instead of 5.4 because the examples depend on lgi. These aren't 1-to-1 bindings to l

Built a client-server application using TCP and UDP sockets, in which the clients can subscribe/unsubscribe to various topics.

Built a client-server application using TCP and UDP sockets, in which the clients can subscribe/unsubscribe to various topics. 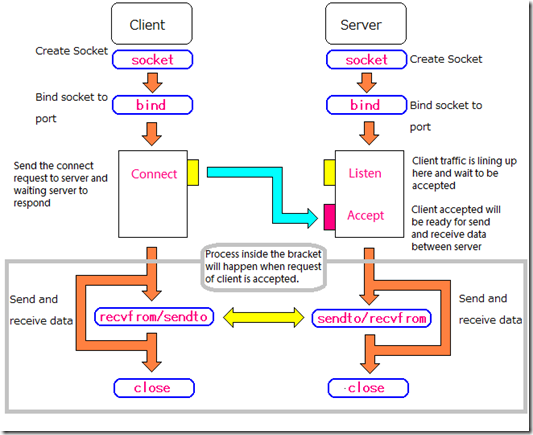 C-ServerClient Creating a server-client application with C socket. How to use? Clone the project and cd in to the main directory. Open a terminal and

The project consists in a client/server architecture voice over IP application, similar to Skype or TeamSpeak.

Babel The project consists in a client/server architecture voice over IP application, similar to Skype or TeamSpeak. Build and Run the Project First y

Pipy is a tiny, high performance, highly stable, programmable proxy. Written in C++, built on top of Asio asynchronous I/O library, Pipy is extremely lightweight and fast, making it one of the best choices for service mesh sidecars. libev is a high-performance event loop/event model with lots of features. (see benchmark at http://libev.schmorp.de/bench.html) ABOUT Homepage:

pine A high-performance and easy-to-use C++ network library. Now this is just a toy library for education purpose, do not use in production. example A