EnTT is a header-only, tiny and easy to use library for game programming and much more written in modern C++.
Among others, it's used in Minecraft by Mojang, the ArcGIS Runtime SDKs by Esri and the amazing Ragdoll.
If you don't see your project in the list, please open an issue, submit a PR or add the #entt tag to your topics!

Do you want to keep up with changes or do you have a question that doesn't require you to open an issue?
Join the gitter channel and the discord server, meet other users like you. The more we are, the better for everyone.
Don't forget to check the FAQs and the wiki too. Your answers may already be there.

Do you want to support EnTT? Consider becoming a sponsor. Many thanks to these people and special thanks to:

The entity-component-system (also known as ECS) is an architectural pattern used mostly in game development. For further details:

This project started off as a pure entity-component system. Over time the codebase has grown as more and more classes and functionalities were added.
Here is a brief, yet incomplete list of what it offers today:

Consider this list a work in progress as well as the project. The whole API is fully documented in-code for those who are brave enough to read it.

It is also known that EnTT is used in Minecraft.
Given that the game is available literally everywhere, I can confidently say that the library has been sufficiently tested on every platform that can come to mind.

I started developing EnTT for the wrong reason: my goal was to design an entity-component system to beat another well known open source solution both in terms of performance and possibly memory usage.
In the end, I did it, but it wasn't very satisfying. Actually it wasn't satisfying at all. The fastest and nothing more, fairly little indeed. When I realized it, I tried hard to keep intact the great performance of EnTT and to add all the features I wanted to see in my own library at the same time.

Nowadays, EnTT is finally what I was looking for: still faster than its competitors, lower memory usage in the average case, a really good API and an amazing set of features. And even more, of course.

The proposed entity-component system is incredibly fast to iterate entities and components, this is a fact. Some compilers make a lot of optimizations because of how EnTT works, some others aren't that good. In general, if we consider real world cases, EnTT is somewhere between a bit and much faster than many of the other solutions around, although I couldn't check them all for obvious reasons.

If you are interested, you can compile the benchmark test in release mode (to enable compiler optimizations, otherwise it would make little sense) by setting the ENTT_BUILD_BENCHMARK option of CMake to ON, then evaluate yourself whether you're satisfied with the results or not.

Honestly I got tired of updating the README file whenever there is an improvement.
There are already a lot of projects out there that use EnTT as a basis for comparison (this should already tell you a lot). Many of these benchmarks are completely wrong, many others are simply incomplete, good at omitting some information and using the wrong function to compare a given feature. Certainly there are also good ones but they age quickly if nobody updates them, especially when the library they are dealing with is actively developed.

The choice to use EnTT should be based on its carefully designed API, its set of features and the general performance, not because some single benchmark shows it to be the fastest tool available.

In the future I'll likely try to get even better performance while still adding new features, mainly for fun.
If you want to contribute and/or have suggestions, feel free to make a PR or open an issue to discuss your idea.

To be able to use EnTT, users must provide a full-featured compiler that supports at least C++17.
The requirements below are mandatory to compile the tests and to extract the documentation:

Alternatively, Bazel is also supported as a build system (credits to zaucy who offered to maintain it).
In the documentation below I'll still refer to CMake, this being the official build system of the library.

EnTT is a header-only library. This means that including the entt.hpp header is enough to include the library as a whole and use it. For those who are interested only in the entity-component system, consider to include the sole entity/registry.hpp header instead.
It's a matter of adding the following line to the top of a file:

Use the line below to include only the entity-component system instead:

Then pass the proper -I argument to the compiler to add the src directory to the include paths.

The documentation is based on doxygen. To build it:

The API reference will be created in HTML format within the directory build/docs/html. To navigate it with your favorite browser:

The same version is also available online for the latest release, that is the last stable tag. If you are looking for something more pleasing to the eye, consider reading the nice-looking version available on docsforge: same documentation, much more pleasant to read.
Moreover, there exists a wiki dedicated to the project where users can find all related documentation pages.

To compile and run the tests, EnTT requires googletest.
cmake will download and compile the library before compiling anything else. In order to build the tests, set the CMake option ENTT_BUILD_TESTING to ON.

To build the most basic set of tests:

Note that benchmarks are not part of this set.

EnTT is available for some of the most known packaging tools. In particular:

Consider this list a work in progress and help me to make it longer.

EnTT is widely used in private and commercial applications. I cannot even mention most of them because of some signatures I put on some documents time ago. Fortunately, there are also people who took the time to implement open source projects based on EnTT and did not hold back when it came to documenting them.

Here you can find an incomplete list of games, applications and articles that can be used as a reference.

If you know of other resources out there that are about EnTT, feel free to open an issue or a PR and I'll be glad to add them to the list.

If you find you can help and want to contribute to the project with your experience or you do want to get part of the project for some other reason, feel free to contact me directly (you can find the mail in the profile).
I can't promise that each and every contribution will be accepted, but I can assure that I'll do my best to take them all as soon as possible.

If you decide to participate, please see the guidelines for contributing before to create issues or pull requests.
Take also a look at the contributors list to know who has participated so far.

I'm a freelancer and a senior software engineer. What else?

Flecs is a fast and lightweight Entity Component System with a focus on high performance game development (join the Discord!). Highlights of the frame CubbyTower CubbyTower is a simple tower defense game using C++ with Entity Component System (ECS). The code is built on C++17 and can be compiled with

NOTICE: This project is currently in the progress of being rewritten for C++17. Check out this issue if you have any suggestions/know a good way to tr

A lightweight but complete ECS implementation for modern C++.

anax ARCHIVED: as I haven't maintained this library for at least a couple of years. I don't have the time or interest to work on this. Please use anot

Yet another component system

Godex Godex is a Godot Engine ecs library. Disclaimer: this module is still in development, open an issues to report any problem or a new discussion i

This is an ECS archetecture in Game implemented by C++

ECS This is an implement of the ECS archetecture in Game by C++17 ⭐ Star us on GitHub — it helps! ECS Sun Entity-Component-System Compiler compatibili

A faster drop-in replacement for giflib. It uses more RAM, but you get more speed.

GIFLIB-Turbo What is it? A faster drop-in replacement for GIFLIB Why did you write it? Starting in the late 80's, I was fascinated with computer graph

Dragon's Dice Roller is the first and (so far the only) open source RPG dice roller written in C available on GitHub. It aims to be a lightweight, simple, reliable and easy-to-use dice roller for any kind of role-playing game.

A foobar2000 component which allows you to load and play ncm files directly. OGRE is a scene-oriented, flexible 3D engine written in C++ designed to make it easier and more intuitive for developers to produce games and demos utilising 3D hardware.

OGRE (Object-Oriented Graphics Rendering Engine) is a scene-oriented, flexible 3D engine written in C++ designed to make it easier and more intuitive for developers to produce games and demos utilising 3D hardware. The class library abstracts all the details of using the underlying system libraries like Direct3D and OpenGL and provides an interface based on world objects and other intuitive classes.

Nuake Feel free to join the discord server for updates: What is it Nuake is a game engine written from scratch by myself. It is not meant to be a end-

Brand-new modern 3D asset importer, exporter library. This library will include common 3D utils funcs. It is written with C99 but C++ wrappers or othe

A library for high-performance, modern 2D graphics with SDL written in C.

SDL_gpu, a library for making hardware-accelerated 2D graphics easy. by Jonathan Dearborn SDL_gpu is licensed under the terms of the MIT License. See

D2DX D2DX is a preservation project for running classic Diablo II/LoD on modern PCs. Version 0.99.403b Mission statement Turn the game into a well beh 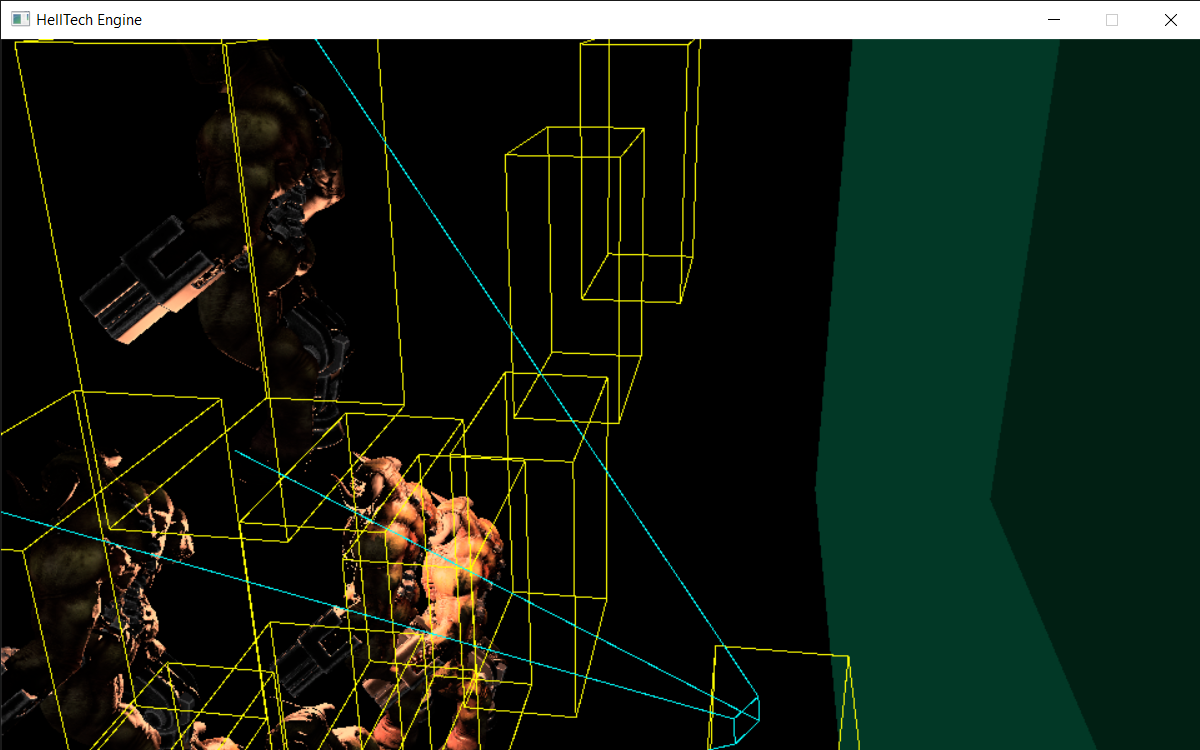