isscrolls is a simple toolkit for players of the Ironsworn tabletop RPG. It is intended for both solo and co-op player and allows to roll different dices such as action or oracle rolls. It also provides results from the static oracle tables from the official rulebook.

Although there are several Ironsworn player toolkits available, there was none for the command line. Since I prefer working in a terminal, I wrote isscrolls. Think of it as the most Unix-like Ironsworn experience you'll ever see. Besides that, you can play it over SSH or even in a shared terminal session (with tmux or screen). 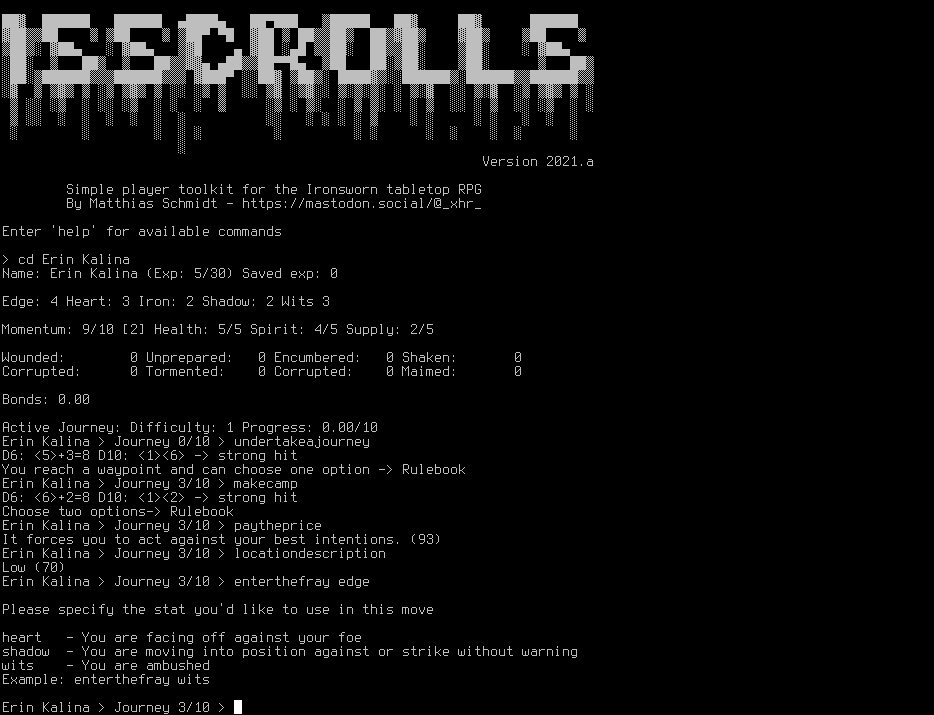 isscrolls is written in C and known to work on the operating systems listed in the table below. To compile it you need the following things:

Install the dependencies as follows:

By default, the Makefile looks for external includes and libraries in /usr/local/include and /usr/local/lib. If your distribution uses special path, you have to modify the Makefile accordingly.

Compile and install with the following commands:

isscrolls presents the user with a command prompt and accepts various commands. A built-in help can be seen by entering help at isscrolls' command prompt.

All commands including their usage patterns are described in the man page.

If you're using isscrolls with a braille display, use the -b Option to suppress the banner on startup.

isscrolls doesn't support all possible Ironsworn moves yet. Yes, I know and sometimes this is intentional. I usually implement moves as soon as I miss one during my own solo-player campaign.

I really need move X to continue my journey. Then please open an issue here and I'll take care of it.

Why does isscrolls so often refers to the official rulebook? The program should help you in keeping track of your character's progress. However, it cannot replace the GM in your campaign. In order to give the player as much freedom as possible, I refrain from doing everything automatically and instead redirect you to the rulebook.

CLIp is a clipboard emulator for a command line interface written in 100% standard C only. Pipe to it to copy, pipe from it to paste.

CLIp v2 About CLIp is a powerful yet easy to use and minimal clipboard manager for a command line environment, with no dependencies or bloat. Usage Sy

pbr2gltf2 is a command line tool for converting PBR images to a glTF 2.0 material.

pbr2gltf2 is a command line tool for converting PBR images to a glTF 2.0 material. The tool is detecting depending on the filename, which PBR information is stored. It swizzles the images and does reassign the channels to a glTF 2.0 image. The tool stores the images plus a minimal, valid glTF 2.0 file containing the required material, textures and images. LwSHELL is lightweight, platform independent, command line shell for embedded systems. It targets communication with embedded systems from remote terminal to quickly send commands and the retrieve data from the device.

flag.h Inspired by Go's flag module: https://pkg.go.dev/flag WARNING! The design of the library is not finished and may be a subject to change. Quick

A command line tool with no external dependencies to print information about an X server instance.

xinfo A command line tool with no external dependencies to print information about an X server instance. Building and running To build the code in thi

fo76utils Simple command line utilities for extracting data from Fallout 4 and 76 files. baunpack - list the contents of, or extract from .BA2 archive

A library for interactive command line interfaces in modern C++